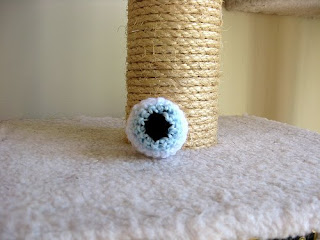 Yeah, I know. I should have made two eyes, especially now that I have two cats, but crafting four to five items a week for 10 weeks is not an easy task. That is why most of these projects are small, quick, and simple. But, I do have some pretty complicated & pretty awesome projects coming up, so stayed tuned!
My crocheted “Betty Davis Eye” cat toy came out pretty cute. Drusilla tried to play with it as I was stuffing it, so I know it will be a huge hit for both little kitties.
The ’80s produced a plethora of great one hit wonders, including Betty Davis Eyes from Kim Carnes. I think Kim Carnes might have had a few other songs on the charts, and I know she sang in We Are the World, but none came close to this mega hit.
And when MTV started on August 1, 1981, this video was played all the time.
Here’s a peek at some of the ’80s other mega one hit wonders: