Drusilla and I spent the new year welcoming a new fur baby into our house. 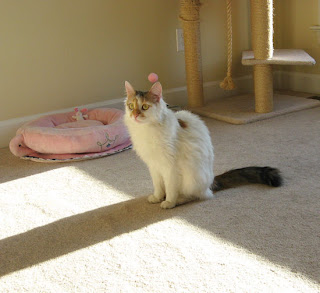 Say hello to Desdemona! She is such a pretty little calico kitty. And don’t you just love her new pink, teacup shaped princess bed? I do, plus I got it super cheap!
My vet said she would have been disappointed if I had not picked another unusual name. Hee Hee! And as an English/British Lit major, I just had to choose the name of a character from my favorite Shakespearean tragedy.
I had been planning on adopting a second cat sometime later on this year, but Desdemona had a different plan. She showed up on my doorstep one cold night, and I just had to take her in.
Drusilla is welcoming her into the house too, by hissing at her under the door and sticking her paw in her face. Let’s hope this is just temporary.
I am trying to do exactly what the vet and everyone else has told me to do, by keeping them separated for at least a week and then slowly easing them together. There has been a little hissing under the door, so I don’t think they are ready to play with each other just yet, but I am confident that they will, eventually, become best buddies.