Football is in the air!
Tomorrow, the Super Bowl Champion Pittsburgh Steelers report to training camp. And to many Steeler football fans, including this one, thus begins football season.
I am really looking forward to football season this year, which officially begins on September 10 with the Steelers vs. the Titans, not only because Steelers football is great but because I am taking part in my first season of fantasy football. Thank goodness my league consists of my family and friends (all girls), so we won’t look too foolish trying to pick which players to play each week!
Football season also means one more very important thing, that fall is just around the corner. Yay fall!
So, in preparation for the 2009-2010 football season, I will be working on a little football pincushion tutorial. You might remember my Steelers pincushion from last year, which I used to count all of the Steelers wins and losses. 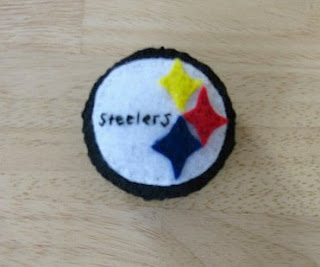 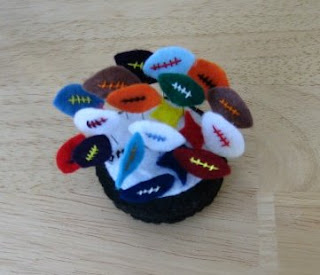 It was a lot of fun! Unfortunately, I didn’t plan ahead to the Super Bowl, I guess I wasn’t that optimistic, so I ran out of “football pins” by the playoffs. Not this year. I am preparing for ring #7!
I’ll be using the Steelers logo, naturally, but if you are a fan of another team and would like me to include your team’s logo leave me a comment or shoot me an email. I’ll pick two other teams to include too, one from the AFC and one from the NFC. I promise not to be discriminating against other teams and their logos, so don’t worry Patriots and Ravens fans. 🙂
Look for the tutorial sometime midway through the preseason games, which are August 9-September 4. I want to give you plenty of time to whip up your little NFL pincushion and football pins before the season starts!
Now that all of the blog parties are over and my blog series tutorials are completed, I will be taking off a couple of weeks to enjoy some family time, my b-day, and some much needed R&R, (of course a little craft time too). But, I will be back soon with new Missie Zee shop items, holiday crafts, a new CAL I’m taking part in (Yay!), and a free tutorial (or two, or three)!
And now I’m off to watch the NFL Network’s coverage of training camp! I know, I’m a big nerd. 🙂