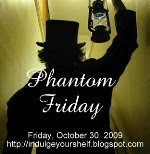 In the spirit of Halloween, Laurie of Indulge Your Shelf has put together a spooky blog event, Phantom Friday. As soon as I found out the event was all about ghost stories I knew I just had to play along.

I, personally, have never encountered any ghosts or ghost like activity, but my sister claims to have been visited by a ghost when we were kids.

My grandparents lived in Orlando, which was about 3 hours from where I grew up, so I used to visit them several times a year. When I would stay with them, my sister and I would sleep on the sofa bed in the living room. Across from the sofa bed were two lazy boy type chairs, a table, and a lamp.

One night, while my sister and I were asleep on the sofa bed, my sister woke up and felt someone staring at her. She looked around the room and sitting with his legs crossed on the arm of one of the lazy boy chairs was a man. At first she thought it might be my dad, uncle, or grandfather, but after her eyes adjusted to the dark room she realized she didn’t recognize the man at all. He was dressed in old time, green golf clothes, green socks, and a green hat with a pom pom on the top. 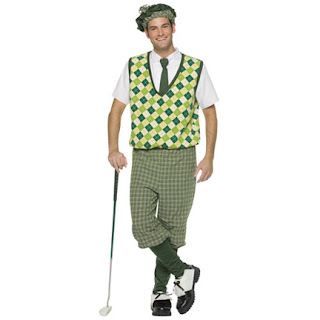 She immediately turned to try to wake me up, but said the ghostly golfer must have put me in a ghost trance because no matter how hard she tried I would not wake up.
After trying unsuccessfully to wake me up, she threw the covers over her head and hid from the man. A few minutes later, she lifted the covers to try and wake me again but the man was gone!
In the morning, she told my parents the story of the golfer. They, of course, thought she had made up the story and dismissed it as a dream or a child’s overactive imagination. But several years later we found out that my grandmother had also been visited by a ghost in the living room of her house. Though it wasn’t the golfer, it was an American Indian.
Was my grandparent’s house haunted? Maybe. Unfortunately, my grandmother died a few years later and the house was sold. I often wonder if the new owners of the house have had any ghostly encounters. Maybe they too have had a visit from the ghostly golfer.
Thanks, Laurie for putting together such a fun event. If you want to read some more ghost stories, visit Phantom Friday.
Happy Halloween!!!