Top
Well, I am finally starting to feel better. Whew! That flu really knocked me on my behind. I am still not 100%, but I am getting there. Once I get rid of this nasty cough all will be well again!
Thanks to everyone who stopped by to send me get well wishes. I really appreciated it!!!
I was feeling so under the weather that I didn’t even have time to pick up a hook or needle. I can’t believe I went almost 2 weeks without any crafting. Instead, I did nothing but watch TV, and for someone who doesn’t watch a ton of TV there were some very interesting TV shows that I caught.
One thing I usually do when I am sick is watch shows that remind me of being a kid. I guess Disney reminds me the most of being a kid, probably because I grew up in Florida and have been to Disney World close to 100 times, so the Disney Channel was watched more than any other channel these last 2 weeks.
During the day, I got caught up on what was happening on Wizard’s of Waverly Place, Hannah Montana, Jonas, and Sonny with a Chance. Watching these shows as a 30 something was very interesting.
The first thing I learned is that apparently everyone on the Disney Channel is not only an actor but a singer too. In between the shows they played music videos from the Disney Channel stars. Who knew all these kids could act, sing, and dance too. There must be a prerequisite in order to work for Disney you must be multi talented.
The second thing I learned is everyone mingles between shows and movies. I caught Selena Gomez from Wizards on Sonny, Sterling Knight and Brandon Mychal Smith from Sonny and Chelsea Staub from Jonas in Starstruck, and Demi Lovado from Sonny and the Jonas Brothers from Jonas in Camp Rock 2 (which I think I’ll be skipping).
While I watched all of these shows, some I enjoyed more than others. 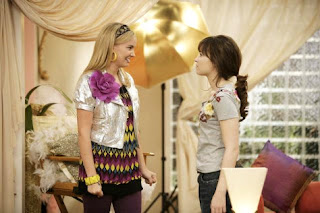 Sonny with a Chance courtesy of Disney
Sonny with a Chance was my favorite. It was funny & cute and actually made me laugh out loud in a few instances, plus it had the least amount of overacting. The feud between the fake shows So Random and Mackenzie Falls was enjoyable too and produced some pretty funny lines. 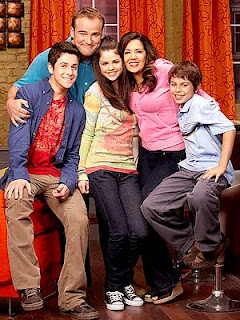 Wizards of Waverly Place courtesy of Disney
Wizards of Waverly Place was okay. I liked the parents the best, which I guess shows my age. Plus, the dad is David DeLuise. I like the DeLuises! One of the episodes I watched was about vampires and werewolves. Let’s just say the special effects needed help! But come to think of it, maybe it was supposed to look like that so it wasn’t too scary for the younger viewers. 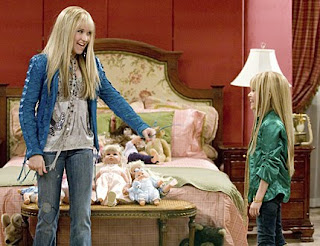 Hannah Montana courtesy of Disney
Hannah Montana was barely bearable. The acting was way over the top, and one of the kids just drove me absolutely crazy. Plus, it was actually the most crude of the four shows. I mean how many fart jokes can kids actually laugh at? 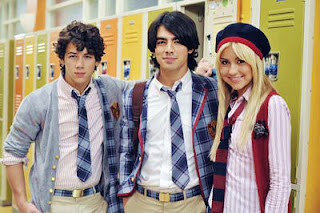 Jonas courtesy of Disney
And then there is Jonas. Oh Jonas. What can I say about the Jonas Brothers except The Monkees you are so not! This one was pretty bad. I usually took a nap when Jonas was on.
I also caught the Wizard’s of Waverly Place movie, which wasn’t as awful as I thought it would be and Starstruck which was actually pretty cute. It even has some very catchy tunes that I’ve caught myself singing. “There’s something about the sunshine baby. . .”!
And to those of you who know me very well, you will be stunned that I actually watched some Phineas and Ferb, which is huge since I am so not a cartoon fan, at all. It was okay, as far as cartoons go.
While these shows are by no means Emmy worthy, they didn’t require any thought on my part. They weren’t dirty or sexy, filthy or crude, but cute, funny, and very easy to watch while battling a headache, body aches, and a 101 fever.
Think these shows were crazy? Check back tomorrow to see what I watched at night! 🙂