Whoever says animals are not like children has never met my two girls! Here is how last weekend went for us. . .

I am in the process of revamping my living room. Nothing too fancy just a little color change here and there. One of the changes I really needed to make was to my slipcovers. Both my couch and chair covers were getting really gross. Unfortunately, I am not crafty when it comes to sewing large items, so though I would have loved to have made my very own slipcovers, I just knew that was not happening. So, Saturday I was a woman on a mission, to find some solid slipcovers that did not break the bank.
I actually thought I got a pretty good deal on my chair cover at Kohl’s, originally $100 I got it for $50, until I went to Bed Bath and Beyond and found a totally awesome deal on my couch cover, originally $130 I got it for $25!!! I was super excited by that find.
Knowing my girls and their unbelievable amount of cat hair, I thought it would be in my best interest to by a new blanket to cover the chair and keep my $50 slipcover as clean as possible. The couch didn’t need one because it has a cheapo blanket on it now that I whip off whenever company comes over.
After searching through several stores, I found a super soft, brown, fleece blanket at Ross for only $6.00. I am telling you, I found some great deals last weekend! 🙂 After struggling for 45 minutes trying to get the slipcover on my chair, I finally threw the new soft blanket over the slipcover.
Okay, here is where things got a little hairy!
I turned around to get the couch slipcover out of the package and Daphne was already curled up on the blanket. Drusilla, who had been hiding behind the couch eyeing the new blanket, was not pleased that Daphne had beaten her to it. She shot out from behind the couch and hopped up next to Daphne.
At this point Daphne, who is always the calm, cool, and collected one, started to get a little peeved that Drusilla was cramping her new space, so she swatted at Drusilla. Drusilla, who has no time for any nonsense, started to bite Daphne’s neck. I truly think Drusilla is a wanna be vampire. It was now time for me to go over, separate them both, and move them off of the new blanket. I had no idea this crazy blanket would cause so many issues.
I realized that this was going to be a daily ordeal as long as we only had one new blanket. So, on Sunday I went back to Ross and bought a second super soft, brown, fleece blanket for the couch. Now the girls are at peace again with Daphne sleeping on the chair and Drusilla on the couch. Good grief!
Both girls are really very good with each other on most days, except every so often they start acting like bratty sisters who don’t want to share their toys. Case in point, last night when Daphne took the dynamite toy hostage. 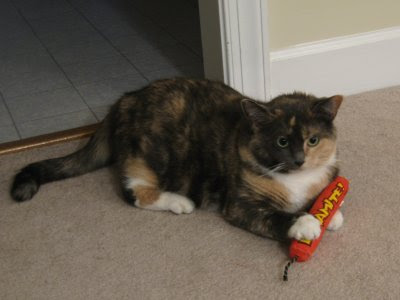 Notice her eyes? Yeah, she wasn’t letting anyone near her Dy-no-mite!