Top
I feel like we’re crafting through the ’80s again. I’ve come to the conclusion that I am going to have to make an ’80s craft every couple of months. I have way too much fun making them!
I have a second ’80s inspired project for the week. Come to think of it I think this is actually from 1990, but I’m still counting it as an 80s movie since it was filmed in the ’80s. This one came via The Graphics Fairy. If you love free vintage graphic downloads, this is the site for you.
Last week, The Graphics Fairy posted a strange but extremely amusing tutorial for a Phrenology pincushion. I had never heard of Phrenology before the kooky comedy, Men at Work, which stars both Charlie Sheen and Emilio Estevez. In the movie, Charlie Sheen’s character, Carl, pretends he is a phrenologist to impress a girl. 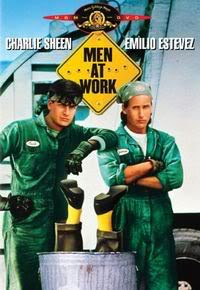 My sister and I love this movie, probably the only two people in the world. We can pretty much quote the entire movie from memory, including the infamous phrenology scene. So, as soon as I saw this project I knew I had to make one of these for my sis.
The original Phrenology pattern included craft terms, which was so super cute, but I wanted to tweak mine to include items from the movie. Enter my handy dandy Paint Shop Pro program.
I “paintshopped” out all of the craft terms and replaced them with characters, quotes, and even a song from the movie. I then included “Phrenology” on the bottom, just in case my sister didn’t know why I was sending her a plush head.
Once I had everything the way I wanted, I printed the picture onto iron on transfer paper and ironed it onto a plain white napkin (it was the only plain white piece of fabric I had on hand). Since the transfer paper was pretty hard, this step turned my pincushion into a plush toy instead. No worries though. It is still pretty funny.
I let the iron on set for a few minutes and then cut out the head, leaving a little space along the edges for sewing. I used a running stitch all the way around the head, stuffed it with polyfil, and attached a ribbon for hanging. Piece of cake!
So, here it is! 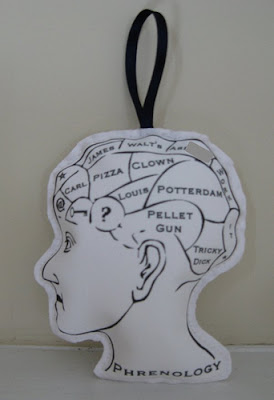 You might notice a little piece of tape over the top portion. That is a dirty word that I included from a quote from the movie. I’m trying to keep my blog rated G. 🙂
I laughed so hard the entire time I stitched this crazy Phrenology head. I hope it makes my sister laugh too!
. . . . . . . . . . . .

For this destash-along project I used 100% of my stash: iron on transfer paper, white embroidery thread, navy blue ribbon, polyfil, and one large white napkin.