On Wednesday, both of my girls became stars!
A few weeks ago, a local artist, Olga from Cat Claws Studio asked for pictures of rescue cats for her 100 Cats in 100 Days project.
For her project, which started on April 1, Olga is painting a portrait of a rescue cat a day for 100 days. How awesome is that?! Each cat is also showcased on her blog with their story and a picture of the painting. The paintings are then put up for sale with 50% of the proceeds going to local cat charities, including Safe Haven for Cats where Daphne was adopted. And, when the project is over, Olga is hoping to publish all of the pictures in a book!
Since both of my girls are rescue cats, I sent Olga their information and a few pictures. Well, on Tuesday night I almost jumped through the computer screen when I saw who had been chosen as the #12 Faces of Rescue 100 Cats. . . 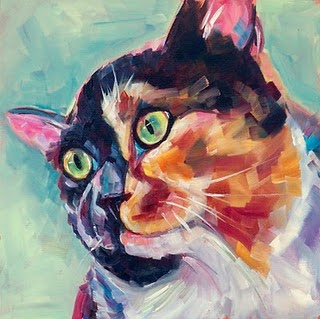 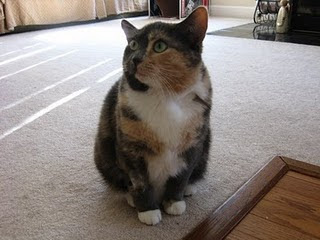 My little Daphne Doo!
I am just amazed at how Olga nailed Daphne’s expression and her eyes! She even made Daphne’s right side, the paralyzed side, look a little sunken in like it is. I absolutely love it!
Then on Wednesday, it was Drusilla’s turn. 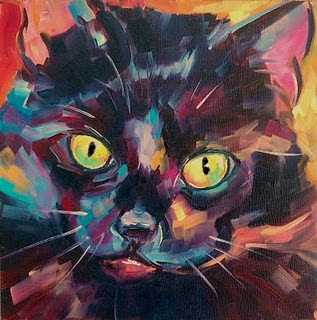 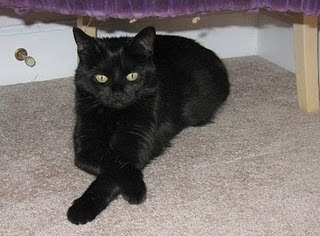 Again, she nailed Drusilla’s eyes. And I LOVE the fact that Drusilla is #13! I mean after all, her birthday is on Halloween. Perfect!
Unfortunately, my girls pictures are not available for purchase. They have already been purchased, by me. 🙂 I couldn’t resist having original oil paintings of Daphne and Drusilla. I have already pushed the stuff off of my mantle to make a spot for them!
So, as the girls were walking around the house with their heads held a little higher than usual, I got my ego stroked a little too.
On Wednesday afternoon I received an email from a producer at Animal Planet asking about my little old blog! What?!!! At first I thought it was a crazy joke, but when I saw her cell phone and work phone numbers on the email, I realized it was 100% real.
Animal Planet is working on a new show that is all about cats and the people who love them. They were looking for unusual stories about cats or cat related items. The reason for her email was to ask if I made my crafts out of actual cat hair. I had to tell her that I don’t intentionally use their cat hair in my crafts, it just sort of gets in there on its own. 🙂
I guess I should put this somewhere on my blog, because I get at least one email a month asking about my cat hair made crafts.
So, unfortunately it looks like I won’t be appearing on Animal Planet anytime soon. But then again who knows, maybe someday I’ll have two little kitty TV stars!!!