Top
I have really been struggling lately with crafting. I think it is because I have had to start getting up earlier and earlier to get to work on time. The traffic around my neck of the woods has become so insane it is crazy. The combo of the early mornings and driving through the traffic has really taken a toll, and I am totally exhausted by the time I get home.
Last night as I was catching up on some blogs, I came across this cute blog-a-long via Lazy Kate Crafts. I thought it would be fun to take part in, plus I’m hoping it might give me a little kick in the pants to start crocheting. After all, next week is our granny along!

As usual I am late to the party. So, today I will post Days 1, 2, and 3! I’ll get with the program and only post one per day for the rest of the week. 🙂
Day 1 – Starting Out
How and when did you begin knitting/crocheting? was it a skill passed down through generations of your family, or something you learned from Knitting For Dummies? What or who made you pick up the needles/hook for the first time? Was it the celebrity knitting ‘trend’ or your great aunt Hilda?
I started crocheting in 2007 while following the blog, Crafty Daisies. One of the blog’s contributors hosted an online crochet class, which I signed up for. I had tried to crochet several times before but just could never get it.
After several times of watching the video instructions, I finally grasped how to make the beginning loop. That was my big hold up. Once I mastered that, the rest came fairly easy to me.
A few days ago, I shared with you my first attempt at crocheting. Not too pretty. But, this is my first actual project following a pattern. 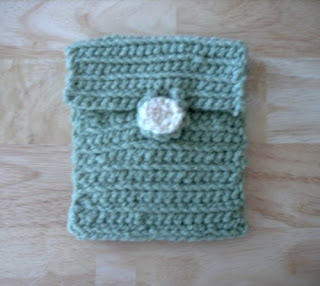 Better, but still not great. It was fun to reread the notes that I had made after finishing this, “My first attempt at following a pattern. It is a little ragged, but I think I have learned from my mistakes. I need to pull the yarn a little tighter.” So true! It took me several projects before I figured out the right tension.
I’ll never forget crocheting this little pouch. It was also my first time crocheting in public, at the car mechanic of all places. I think every greasy looking guy was watching me crochet this, which could why it is a little ragged too. 🙂

Click here to visit other blogs tagged with knitcroblo1 for the Knit & Crochet Blog Week.