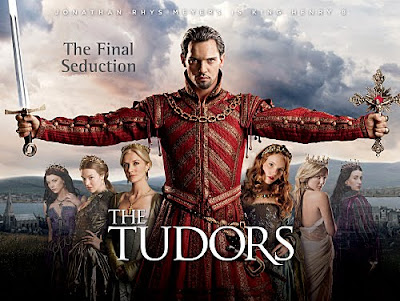 The final season of The Tudors begins on Sunday and I am super excited to see how Showtime ends it all. Let’s see, Henry VIII is on wife #5 now. Ooh, only one more to go!
I do hope Showtime continues with Queen Mary and Queen Elizabeth. The young lady who plays Queen Mary (though she is Princess Mary now) on the show is superb!
I just love Tudor history. While majoring in English, I spent most of my time writing and studying British Literature. I didn’t declare a minor, instead I chose a time period as a sort of minor. My college called it an emphasis. My emphasis was on the Elizabethan Era, which included the writings and poetry of the era (Shakespeare, of course) and Queen Elizabeth. So, being that Queen Elizabeth was a Tudor, naturally I love all things Tudor.
Have you seen this awesome knitted set of Henry VIII and his wives? 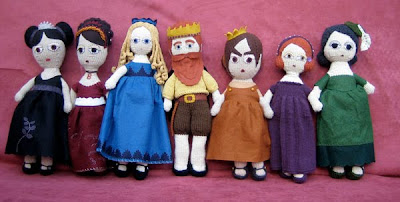 Photo courtesy of Craft.com
My favorite is wife #2, Queen Elizabeth’s mum, Anne Boleyn. Check out what happens to her doll. . . 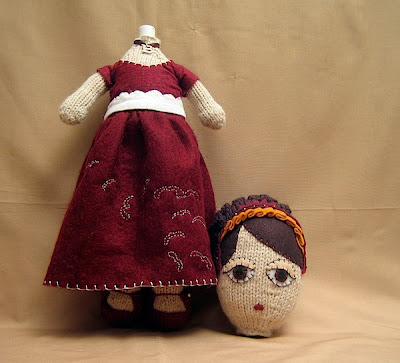 Photo courtesy of Craft.com
Pretty gruesome, but clever and cool!
Wife #5, Catherine Howard, doll’s head comes off too, as it did back in 1542. I think I know what is going to happen on the show soon. One cool fact: Catherine Howard was a first cousin of Anne Boleyn. I find that super interesting, since they were the only wives that were beheaded.
Henry VIII described Catherine Howard as his “blushing rose without a thorn”. So, in honor of wife #5, I whipped up a little Tudor rose ornament. 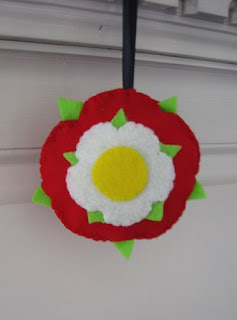 For this destash-along project I used 100% of my stash: red, green, yellow, and white felt scraps; polyfil; matching thread; and black ribbon.