Top
Pink and Polka Dot is hosting a really funny contest, the ugliest sofa contest. I know I have an ugly sofa, maybe not the ugliest, but I thought I would add it to the mix anyway. 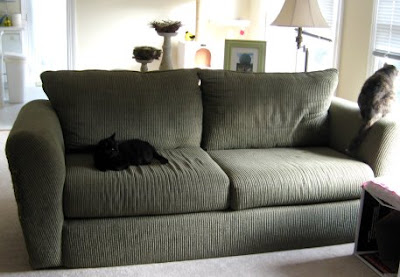 I bought this sofa when I first moved to North Carolina. It was purchased from Rooms to Go for next to nothing. One thing I have learned from buying really cheap furniture is you get what you pay for!
About 6 months after buying the sofa, and 100 flips of the cushions, I had to invest in a support plank for under the cushions, since they had already formed grooves from where my bum had been. You can see one of them where Drusilla is laying. She only weighs 10 pounds so it doesn’t affect her, but I sit on it and go straight to the wooden frame!
Check out the fabric! I am not sure what kind it is, but it is really rough, like sandpaper rough. Before I bought my slipcover I had to put a towel or blanket down to be able to sit on it.
The color is pretty gross too: green squares with brown and gold specs.

The only ones in the house who like the sofa are the girls. They really like the nubby feel of the fabric. I’m really not sure why because I hate it.
I had the sofa for about a year when I adopted Drusilla. I think she figured since the couch felt a lot like her scratching post she’d scratch it too. 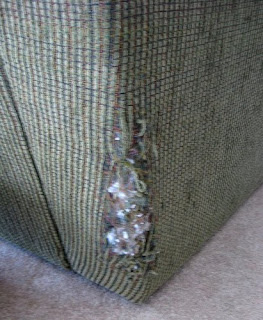 This is just one of three scratched spots. I have tried on several occasions to sew the couch back together again, but the fabric is so weird and has unraveled to where I can’t do it anymore. So, that is when I invested in my first slipcover. We are now on our second one and it makes the couch look a lot nicer and easier to sit on.
Every year when I get my tax money back I say I am going to buy myself a new sofa and then I don’t. I really think next year might be the year. This ugly, painful thing has really got to go!
Want to see more ugly sofas? Swing by Pink and Polka Dot to see the other entries! There are some real doozies there. 🙂