I’ve been feeling very uninspired lately. Maybe it is the 100+ degree heat, but I just haven’t wanted to craft anything! But my mind has been changed after I received a sweet, crafty package from Laurie at Indulge Your Shelf, won a really cool sewing book from Lark Books, and came across the coolest craft tool ever all in a matter of a week. That was just the kick start I needed to get the creative juices flowing again.

Of course I still have yet to craft anything, though I did do one of the three swatches I need for my HPKCHC OWL, which starts in two days. Yikes! 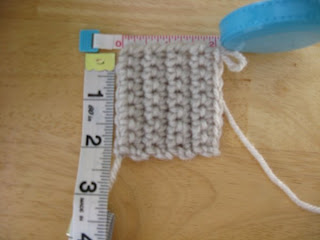 I’ve been primarily working on designing my own website. It is going a lot slower than I had anticipated. I thought it would be ready to go live by now, but it isn’t even close. So, that means pushing back the opening of my Etsy/web shop. I’m thinking now sometime early next year. That is okay with me, since I haven’t really crafted anything for it anyway.

I’ve been tinkering around the blog too. I changed the colors around and widened the center part to give me more room for bigger pictures. I’m sure I am not completely done with it yet. 🙂

I’ve also been baking a little again. Last night I made my first batch of Star Wars cookies.

I’m not sure if you have seen these, but the cookie cutters are from Williams Sonoma. I got them about a month ago and was stunned that I bought the last box. They were really popular in my neck of the woods.

I am a big Star Wars fan. Not huge like some people who have seen the movie 100+ times and camp out, but I do love me some Star Wars! If you want to learn everything there is to know about Star Wars, because who doesn’t, check out Wookieepedia. It is like Wikipedia but for Star Wars and wookie lovers everywhere.

My favorite characters have always been the bad guys, so when I noticed that two of the cookie cutters were Darth Vader and a Stormtrooper I knew I had to make them.

Unfortunately, my first batch of Darth Vaders spread out so much that you couldn’t even tell what the cookie was supposed to be. My second batch, which were the Stormtroopers, came out much better. 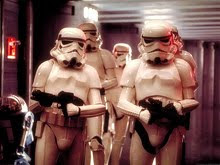 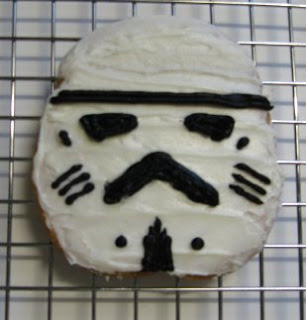 I used store bought cookie dough, which I think was a big mistake. Next time I’ll make the cookies according to Williams Sonoma. I think I’ll try their royal icing recipe too. These were iced with white cake icing and Wilton’s black icing in a tube.

Also, don’t forget to vote for our Christmas CAL. As of this morning, the gnome had a slight lead over the Christmas trees and the mistletoe ornament, though they are all really close.

Voting is open until Friday. I’ll announce the winner next Monday and give you the supply list as well, so get those hooks ready!