Friday I told you how I met Drusilla. Well, today it is Daphne’s turn. 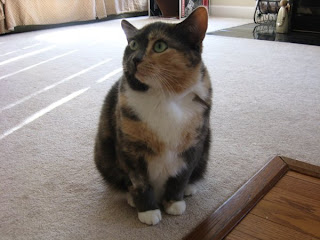 About two years ago, I decided it was time for Drusilla to have a friend. She had been by herself for so long I didn’t really know how she would take to another cat, but I thought I’d give it a try. I figured I’d adopt a cat sometime in the new year, but I really didn’t have a specific timeline as to when.

Late December of 2008 a little kitty ended up on my back porch. She was super friendly but pretty skinny, so I wondered if she belonged to someone or was just used to people. It was so cold outside that I just couldn’t leave her alone, so I brought her in and quarantined her in the downstairs bathroom until I could take her to the vet. I named her Desdemona. I know me and my “D” cat names.

I tried several times to find the owners, but each time with no luck. I figured someone had done like they had with Drusilla and opened up the door and let her out. I slowly started to introduce Desdemona to Drusilla. Drusilla wasn’t really crazy about her, she hissed and swatted at her, but I figured over time they would grow to love each other.

Two months later, the weekend of Valentine’s Day, I found Desdemona’s owners. They were a married couple with a military background in Romania. They had actually flown Desdemona (or Mica) from Romania to the US, and were besides themselves when the TV repair guy let her out. Thought it was really hard to give her up, I was so glad the couple had their “little one” back again. 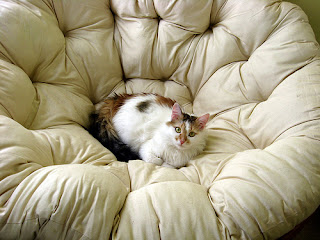 So it was back to just me and Drusilla. I knew I still wanted to get a second cat, but after giving Desdemona back to her family I was just not ready.

A few months later, I finally decided I was ready to adopt a second cat. I knew June was adopt a shelter cat month, so I got myself, Drusilla, and the house prepared for a new addition to the family. I really wanted to get my second cat from a no-kill shelter, so I did some research and found a cat only no-kill shelter, Safe Haven for Cats. I also wanted an older cat, preferably one Drusilla’s age, so I checked the shelter’s website to see if they had any older cats. I found a five year old cat, Taffeta.

When I got to Safe Haven for Cats the adoption consultant asked me a series of questions to get a feeling about which cat would be the best fit for me and Drusilla. There were three that were chosen.

The second cat was a super cute white kitty cat with a respiratory problem. I would have loved to have adopted her, but with my schedule giving her daily medicine just wasn’t going to work out.

The third cat was Taffeta (Daphne). She was older (five years old) and shy, but once she got into the adoption room she started to play and rub up against me. The resident vet came in and told me her background. She came to them as a stray and was diagnosed with partial face paralysis. They think her face became paralyzed while she was living on the streets, possibly from a fight or an other kind of trauma. Though the right side of her face droops a little and her left eye never closes, she is 100% healthy. She had also been at the shelter the second longest, 10 months.

I knew that super cute calico cat was the one. She was mellow which was perfect for Drusilla, she was such a sweet girl, and she had been there so long.  So, that day I brought her home. 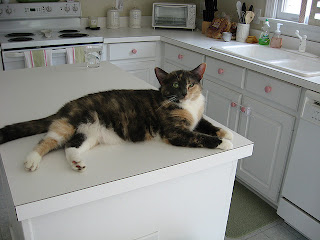 One of the first days after I brought Daphne home. She was starting to learn
the house, but was always on alert.

After about a week of being separated from Drusilla, the two finally got together. One hiss at each other was all there was and the two became best friends! 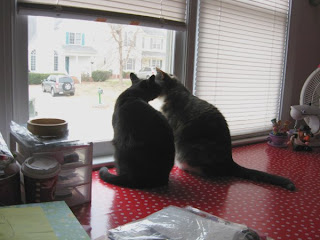 The girls love each other!

The months following Daphne coming home came with some health issues. I think she had a bit of a hard time adjusting to the changes of me, the new house, and Drusilla. But now a year and a half later she is 100% comfortable and happy. 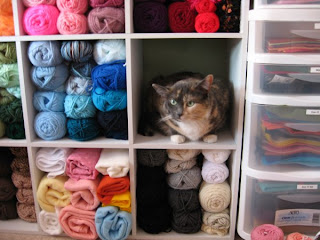 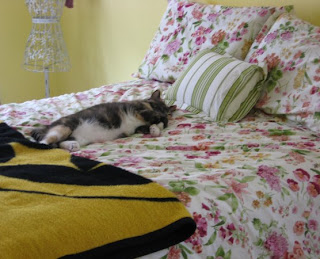 She was never a lovey-dovey cat, completely opposite of Drusilla, but within the last couple of months she is slowly becoming a lap cat. She sleeps with me on the couch and even joins Drusilla and me on the bed. She is such a special kitty and I’m so glad we found each other!