As many of you know, my girls, Drusilla and Daphne, were both adopted from local animal shelters. They mean the world to me and make my life more enjoyable every day. After all of this time, I don’t think I ever gave you the story of how I adopted them. So, here is a little background on how Drusilla became part of my family. I’ll tell you about Daphne tomorrow! 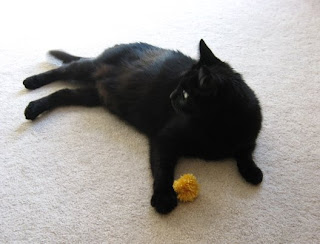 Drusilla was adopted five and a half years ago from the SPCA of Wake Co., my local county animal shelter. At the time that I adopted her the shelter was acting as a “normal” shelter, meaning they were not a no-kill shelter. Drusilla had been in the shelter for about 2 months when I met her. I am not sure exactly how long shelter animals are given to be adopted, but I thought 2 months was quite a long time.

I went to the animal shelter looking specifically for a black cat. So many people had told me that black cats were mean and all of the other superstitious crap that comes along with them, but I didn’t care. I just had to have a black cat. I also wanted an adult cat that had been there for awhile, since the kittens are almost always adopted first.

I went into the cat area, which is always hard for me anyway because I feel so bad for all of the cats and want to take them all home with me, and saw the cutest petite black cat playing by herself in the corner. Razzledazzle was her name. The woman at the shelter told me that she had been there for several months, but had only recently been put up for adoption. She had been quarantined due to temperament and behavioral issues and she was two years old. The woman also said that Razzledazzle (Drusilla) had been found in an apartment complex and was most likely abandoned when her family moved. Horrible!

I walked over to the corner where she was, crouched down, and put my hand out. The woman said it might take time for her to warm up to me, but she immediately came right over to my hand and started rubbing up against me. Well, that was it! It was meant to be!!! So, the next day I picked her up, changed her name to Drusilla after the female vampire on Buffy the Vampire Slayer and because she was no Razzledazzle, and took her home! 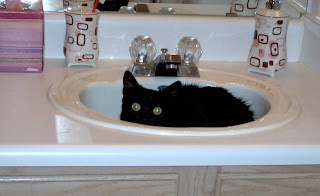 Drusilla about a month after I adopted her. She was so small she used to sit in the sink. She was still a little scared, as you can see in the picture.

It took Drusilla about a year to become completely comfortable with me and her environment. All of her behavioral/temperamental issues are gone, except one. Boxes and moving really freak her out. I think she feels she is being abandoned again. Unfortunately, we moved 3 years later into my house. That was quite an adjustment for her. But, she is sooo much happier in a house instead of a one bedroom apartment. I know she still has this issue, so anytime I get a box I try to put it away as soon as possible. She doesn’t need that stress. 🙂 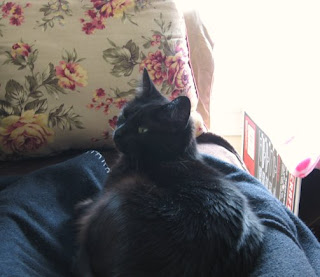 She’s come a long way in five years. She is completely comfortable around me, Daphne, and pretty much all people. She is always the first to greet visitors at the door. She is also my snuggle buddy. She loves to be picked up and especially loves to curl up next to my leg and take a nap, as she’s doing in the picture above. She is such a sweet girl, and I am so glad she picked me to take her home that day in July.

The shelter where I adopted Drusilla from, the SPCA of Wake Co., has since become a no-kill shelter. This makes me so happy! It has allowed the SPCA to save more animal lives than ever before. The bad news is the SPCA of Wake County receives NO funding from any “national” charity, plus they do not get any government funding.

This April, I’ll be walking in the shelter’s annual K9-3K dog walk. I’m so proud to be walking this year on behalf of all of the shelter kitties, like Drusilla and Daphne, especially since the shelter is now 100% no-kill. I have set a walk goal of $250 and would love all of your support.

I have placed a button on my sidebar if you would like to contribute to my walk goal. The link will take you directly to my walk page, and any amount is welcomed.

I know many of us are under hard financial times, so if you can’t donate but would like to cheer me on please leave me a comment or shoot me an email. Or, if you are in the area and walking in April let me know. I’d love to hear from you!

Thanks and check back tomorrow to hear about how Daphne became a member of our family!