Sunday I decided I was going to learn how to knit. It’s not like I don’t have a million things going on right now or anything, right? 🙂 But I didn’t care. I sat down on the couch with both cats, turned on some TV shows I had taped, grabbed my cup of tea, a skein of yarn, and a pair of knitting needles and got started.

I have attempted knitting twice before and just couldn’t get it. But Sunday it was like my brain was on fire. I picked it up so fast that I was knitting in 20 minutes. It could also be due to the great tutorials by Knit Again, thanks Molly!

One thing I have learned in my two days of being a knitter is it is A LOT more time consuming than crocheting. What would have taken me a minute to crochet took me an hour to knit. But maybe that is due to the fact that I am new and still learning, at least that is what I am telling myself!

The thing I am struggling the most with is with holding two needles instead of just one hook. That is so challenging, and in turn is making my hands cramp up. I’m hoping that will subside over time.

So here it is. My very first knitting attempt. 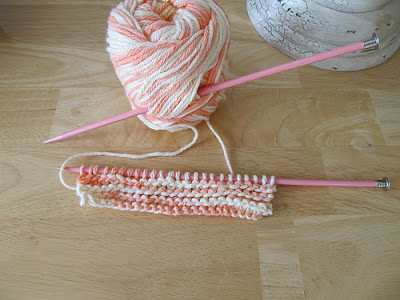 I am so happy that it actually looks somewhat straight! This picture was taken Sunday afternoon so I have done a few more rows since then, but I am still nowhere near being done. I’m hoping by the end of the week I’ll have completed my first knit project.

Also, don’t forget to sign up for a chance to win a Mome Rath. If there aren’t that many sign ups I might just have to send everyone one!