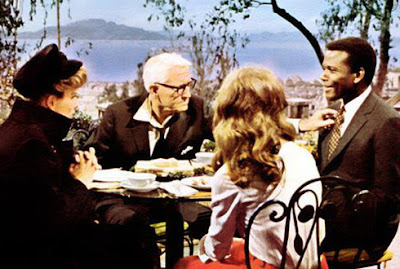 I’m sure you all know the premise of this movie. . . white woman brings home black man to meet her family.

I was really looking forward to seeing this movie. I had heard so many wonderful things about it. But boy was I disappointed. I was not impressed with this movie, at all.  It wasn’t because of the subject matter, but because of the writing and especially the acting.

I’m sure the fact that a white woman and a black man being engaged was shocking in the ’60s, but what I found more shocking was the fact that he was 37 and she was 23, and that they were going to get married after only knowing each other only 10 days. I mean I can’t imagine me bringing home a 23 year old guy for dinner, or can I. . .  🙂

I figured this movie would be fantastic with all of the acting greats that were in it, but I was extremely disappointed. Katharine Hepburn, Spencer Tracy, and Sidney Poitier appeared rigid and seemed as if they were reading their lines off of a teleprompter. 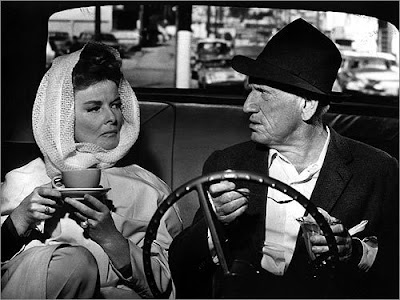 I actually was getting a little tired of Katharine Hepburn crying throughout the entire movie, but as I was looking for movie screen shots online I read that Spencer Tracy was dying as they were filming the movie. She knew this would be the last film they worked on together (he died 17 days later). After reading that I got teary eyed every time she did. It is funny. That caused me more emotion that anything in the movie did.

Oh, and the actress who played the daughter was just plain awful. And I read she was nominated for an Oscar for best supporting actress for this movie. 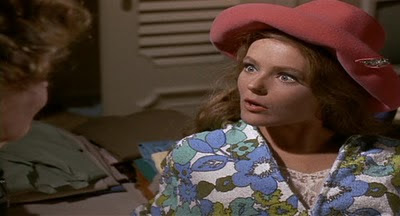 Again, the Academy disappointed me. First with ignoring Gloria Swanson and now this!

The one person I did really like was the maid, Tilly. I wish she had a bigger role. And it wasn’t until about an hour into the movie before I realized that Tilly was Mrs. Jefferson (you know, Weezy). I thought she had best scene when she yelled at Sidney Poitier. (Caution: There is a derogatory word used in this clip)

I was also surprised to hear, “Glory of Love” (the Billy Hill song not the Peter Cetera one), as the main song. It was great for the opening credits, but I got a little sick and tired of hearing the same song played throughout the entire movie.

And then there was the random dancing by the meat delivery boy and Dorothy on the front porch. What the heck was that all about? Very weird!

So as I’m sure you can guess, I did not like this movie. I almost turned it off, but I made it through the whole thing, all 107 minutes of it!

I’m going to give it a D. It wasn’t the worst thing I’ve ever seen, but I definitely won’t be watching it ever again.