Top
I just found out that Van Halen is coming to Raleigh this summer. Now that should be a wild show, although I am not sure they will be as crazy as they once were now that they are pushing 60. But then again, look at Mick Jagger!
This past fall, I came across a super cute sewing pattern for a felt guitar. As soon as I saw it I knew I had to make it for my best friend’s son for Christmas. He is really into music and I thought an electric guitar would be so cool for a 2-year-old boy. Plus, the pattern immediately reminded me of one of Eddie Van Halen’s guitars. 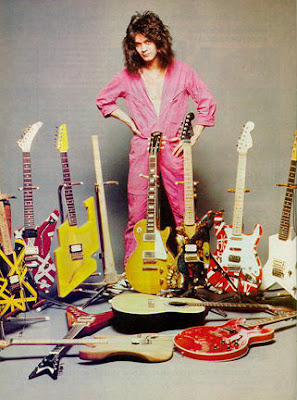 My best friend is a big Van Halen fan, so I thought she’d get a kick out of a miniature felt Eddie Van Halen guitar. So, I whipped up one over the Thanksgiving weekend. 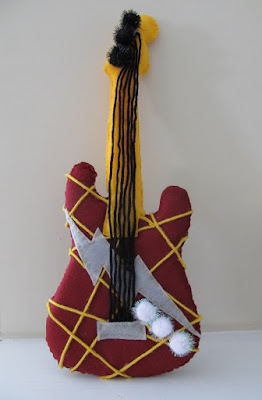 Not an exact replica, but pretty close!
I changed a few things from the original pattern. I used yellow yarn as the paint stripes instead of sewing them with a sewing machine, because I still can’t sew in a straight line on a sewing machine. I know, what a nerd! I also used sparkly pom poms as the buttons. They are a little girly, but I liked them and they were the only pom poms I could find in November. Who knew pom poms were so popular at Thanksgiving?
So, the results are in, and the guitar was a big hit! I am so glad everyone liked it. 🙂