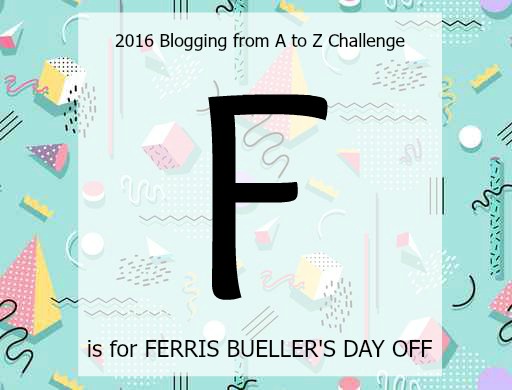 Life moves pretty fast.
If you don’t stop and look around once in a while, you could miss it

I can’t believe it has taken me until the letter “F” before including an ’80s movie. But this one is big!

There are so many great and timeless ’80s movies, but for me Ferris Bueller’s Day Off is the best of the best. It is a great comedy, by the best director of the decade, has a perfect cast, and totally captures what it was like to live in the ’80s.


If you haven’t had a chance to see this movie yet, let me give you a little synopsis:

Ferris Bueller is a high school senior who decides to skip school and spend the day visiting Chicago with his best friend, Cameron Frye and his girlfriend, Sloane Peterson. While on his “day off” he takes in a Chicago Cubs ballgame, eats at a fancy restaurant, visits a museum, and sings on a parade float all while trying to avoid being caught by his principal, Ed Rooney, his parents, and his envious sister, Jeannie. FYI: I LOVE Jeannie. She is my favorite character. She is too funny. And her scene at the end of the movie with Charlie Sheen is one of my favorites.

Thanks to outlets like Netflix, you can go online right now and watch Ferris Bueller’s Day Off. We couldn’t do that back in the ’80s. We had to have our parents drive us to the local movie rental store, scour the shelves for the VHS tape, and hope they had a copy. If all of their handful of copies were checked out, we had to pick something else out and go home bummed because we couldn’t see Ferris. Yes, that was me every weekend. I eventually bought the VHS tape and then the DVD. Now I own the Blu-Ray.

And thanks to TCM and Fathom Events, next month on May 15th and 18th you can see Ferris Bueller’s Day Off again on the big screen. To celebrate the movie’s 30th Anniversary, that makes me feel so old, select movie theaters are showing the movie. Yay! I already have my ticket for the 15th and I think I’ll head back to see it one more time on the 18th. 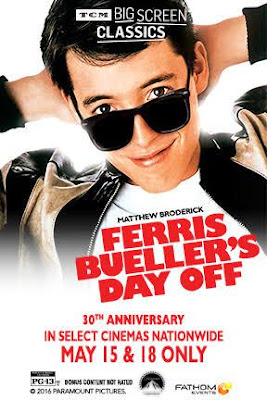 Be sure to check out Fathom Events‘ website. They are re-releasing at least one retro movie a month. Last year I saw The Breakfast Club and in February I saw Pretty in Pink. This June it is the original Willy Wonka and the Chocolate Factory. I already have my golden ticket for that show too! And in October it is The Shining. Not so sure about seeing that one again.

I am so thankful for TCM and Fathom Events for re-releasing these movies, even if for a day or two. It is so fun to go to the theater with other ’80s fans and experience them all over again. I have to admit, I got a little choked up when the theme from The Breakfast Club played on the big screen. It is kind of like when the theme for Star Wars starts the movie. I get a little teary-eyed for that too. I am such a softy when it comes to nostalgia. 🙂

Ferris is such a timeless movie, one that every student or former student can relate to. I mean, how many of us have wanted (or did, shhh!) take a day off to skip school?

There are a few Ferris crafts out there. For a small fee you can cross-stitch your own Ferris character with weelittlestitches’ pattern or this really cool Ferris silhouette from Plastic Little Covers. And oh my gosh, if this tutorial was for an adult I would totally have one of these, you can sew your favorite little girl their own Sloane jacket thanks to Very Shannon. Who am I kidding. I’ll be making a big girl Sloane jacket for myself. 🙂

And there will be one more Ferris craft come this summer. I’ve already completed a Ferris Bueller inspired craft tutorial for this summer’s Crafting Through the ’80s craft-a-long. All of the information about the craft-a-long will be posted on the final day of the A-Z Challenge. So, stay tuned for that.