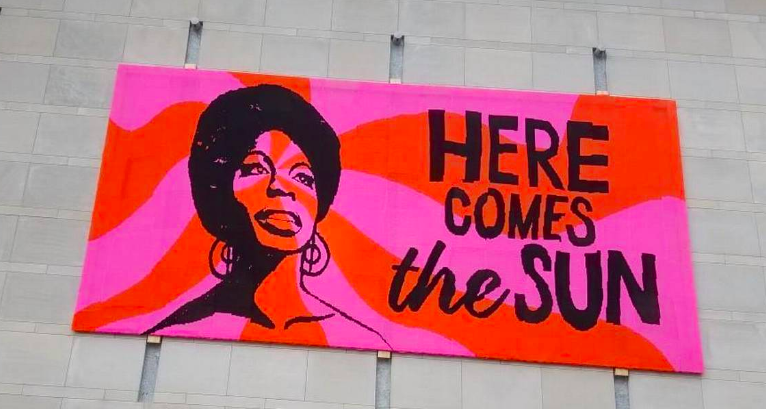 In September 2017, I had the opportunity to be part of one of my most artistic craft projects to date. Over 100 crocheters from the Raleigh/Durham area crocheted a panel for the Nina Simone Mural that was displayed in front of the Raleigh Convention Center October 2017-June 2018, and I was fortunate to have been one of them.

The project came about at a time when I was very down about, well everything. I had lost both my beloved kitty of 13 years and my job of 12 years just a few months earlier. It was a period of sadness and self-doubt, and then I came across a post on Facebook asking for crafty volunteers to be a part of a large crochet project.

I later found out it was a crocheted mural featuring North Carolina’s own, Nina Simone.

The Nina Simone Mural was part of Olek’s “Love Across the USA” project, celebrating the accomplishments of women. Nina Simone was the third mural after Susan B. Anthony and Harriet Tubman.

Not only did I have the time, actually all the time in the world since being laid off, but it was a crochet project. In the crafty community, crochet always takes a backseat to knitting. So, I was so excited to be able to contribute my time and my crochet talent to such an awesome project.

After reaching out to my local team leader, I realized I was coming a little late to the party, which is usually what happens to me. The volunteers were already several weeks into the project, so I had to jump right in and make up for lost time.

I made it to one of the last workshops, met with the local organizer, was assigned my square, picked up my yarn (which was 100% donated by Red Heart Yarn), and then was off to the races.

I am totally math deficient, so I really didn’t understand just how big a 4″ x 4″ square was going to be. It became apparent pretty quickly that it was going to be a BIG square. Even my kitty, Daphne offered a paw, or two, to help with the project.

Dividing my time between looking for a job and crocheting, I was able to complete my square in less than two weeks.

When I dropped off my square, I met with several of the organizers who mentioned that they needed volunteers to help piece the mural together. Of course, I signed up.

Putting the Mural Together

Working on the square was super fun and rewarding in and of itself, but going to the ballroom at the Raleigh Convention Center in downtown Raleigh to help piece the mural together was awesome! All of the squares were spread out along the floor, and for the first time I got to see what the entire mural was going to look like.

After checking in with the organizers, I got to meet the artist, Olek, and began talking with her. She asked which square I had done, and I showed her. She nodded and said, “Good. Do you think you can fix one of the ones that was crocheted incorrectly?” I wasn’t expecting to crochet another square but enjoyed doing the first one, so I accepted the challenge.

The missing square in the picture above was the piece I was given to recrochet.

She counted a few rows up from the bottom and said that I would have to pull out all of the yarn to there, which was almost the entire square. I started to panic a little thinking it took me two weeks to do my square and now I had to do this square in under eight hours. But, I grabbed a Pepsi and bag of chips that they had for the volunteers, and I started to rework the square.

It took me a little under six hours (I know this because I had to keep putting money in the meter every two hours), but I frogged and recrocheted almost an entire 4″ X 4″ square.

Unfortunately, I was unable to make the big unveiling that weekend, but I made a trip downtown a few weeks later to see Nina in all of her glory. The mural looked amazing. I was even able to locate my two squares.

Rock and Roll Hall of Fame

The mural remained at the Raleigh Convention Center for eight months until it was taken down and sent to the Tryon Fine Arts Center in Tryon, NC, Nina Simone’s hometown. There it stayed displayed outside until September 2019. You can see just how much the sun faded the mural over the many months.

Music, crochet, and a strong North Carolina woman, I truly couldn’t have asked for a more perfect project to be a part of.

Olek’s “Love Across the USA” project is still going strong. She has added a few more murals to the project, including Marian Anderson and Sojourner Truth. You can find all about the project and Olek, here.

Olek has also included mini versions of all of her murals on her website, Love Across the USA. I love that! Of course, I am adding a mini Nina to my 2020 crochet projects.

My name is Melissa, and I have been making fiber art ever since my grandmother gave me my first cross stitch kit for Christmas in 1984. I was instantly hooked! I now blog about all of my crafty obsessions.